Now that’s a mouthful: Grilled Chicken Summer Salad [and Tacos!]. Well, that’s because it’s a combination of meals, all in one, thanks to two of my favorite foodie bloggers, Gaby Dakin of //whatsgabycooking.com”>What’s Gaby Cooking, and Lindsay Ostrom of //pinchofyum.com”>Pinch of Yum. I’ll also start by saying that when I originally saw this recipe, I sent it to a friend who loves cooking as much as I do. His immediate response “A woman I follow in the South of France is friends with that author and has been showing lots from that cookbook. Every damn thing looks amazing. I think I’m going to order it.” So the original recipe from Gaby’s new cookbook: What’s Gaby Cooking: Everyday California Food is called Summer Chipotle Chicken Cobb Salad. Since I changed up the recipe a bit, I renamed it, but the bulk of the recipe is republished from Gaby’s cookbook. It goes without saying that this is one cookbook you probably need to buy.] And now, we’re off and diving into the Grilled Chicken Summer Salad and what makes it so damn good.

What Makes This Grilled Chicken Summer Salad [and Tacos!] Magical?

You may be thinking, “So, it’s another salad recipe, so what?” Well, you would be wrong there. Any time my children chow through something that has the word “chicken” in it and say things like “Mommmmmm, this is delicious,” that recipe is a keeper. Because my butthead children think they don’t particularly like chicken and every damn time they ask what’s for dinner and I say “chicken” they groan. I kind of hate them, actually. That happened last night, when I was making this grilled chicken summer salad, and I did what I do, which is ignored them.

This Grilled Chicken Summer Salad was not only amazing, it was really pretty simple to whip up. I marinated the chicken breasts (which I cut in half to make them smaller for cooking) in a bowl slathered with a bunch of the Ancho Pepper Adobo seasoning, Avocado Oil (which I now use for everything because I love it so much) and spices. I aimed to marinate for an hour, but probably ended up at slightly less than that because: Life.

At the very last minute, I discovered someone had disassembled our grill to (ostensibly) clean it, so I cooked these chicken breasts off on the stovetop in my trusty cast iron skillet. Never a problem.

While the chicken was cooking, the bacon also sizzled on the stovetop. 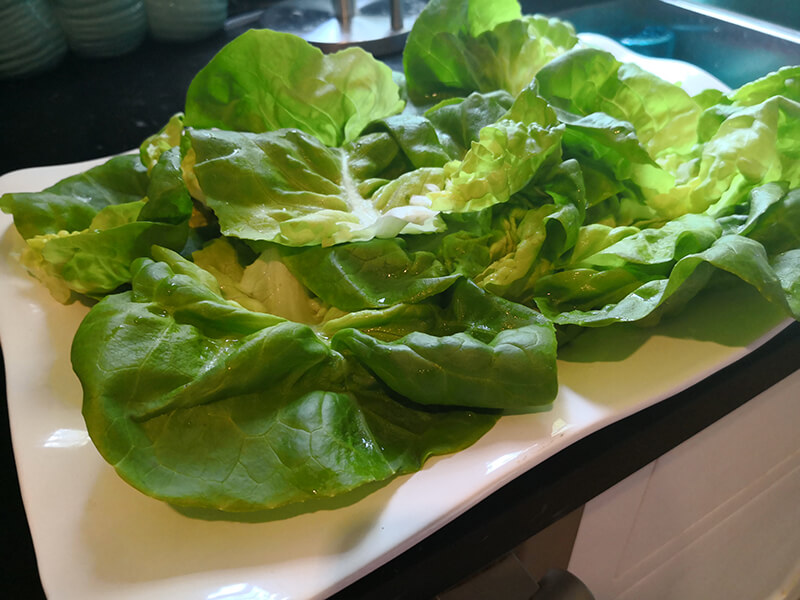 Then I prepped the strawberries, avocados, and corn.

Then, because I love cilantro, I had to make the cilantro dressing recommended by Lindsay. Please don’t groan at the thought of making your own dressing. Once you get started down this path, you’ll never buy store bought dressing again. In fact, getting the mini-Cuisinart out of my cabinet took longer than it took to make this dressing—I highly recommend you try it. IT WILL GO WITH EVERYTHING!!!!!

Before I knew it, the chicken was done, the bacon was done, and I was ready for the final assembly. I sliced the chicken and cut it into bite-sized chunks, and then started layering the dish all together, making sure it was visually stunning about which not one person in my family gives a crap but me. But hey, it makes me happy, and that’s all that matters. Here’s the grilled chicken summer salad in all its posh glory …. it wouldn’t look nearly so posh on mixed greens, now would it?

And there you have it—Grilled Chicken Summer Salad, looking pretty doggone posh.

Here’s the finished salad on my plate, right before I started stuffing it into my pie-hole.

So why do I call it “Salad and Tacos!” ????? Great question! That’s because my children love to make tacos out of everything. And when I gave them a choice of eating this as a salad or plopping it into a flour tortilla shell and topping it with sour cream, well, they were all in on that front. Here’s Lucy’s Grilled Chicken Summer Salad Taco!

This is a kid, btw, who hates cilantro with a passion. She tried the cilantro vinaigrette and absolutely loved it. I’m pretty sure the world is coming to an end.

So do yourself a favor on a few fronts. First: Try this recipe. Either my version or Gaby’s original version, or Lindsay’s slightly modified version. Second: Buy Gaby’s cookbook. Even if you think you already have too many cookbooks, I’m thinking this one is one you’ll not regret adding to your collection. I linked to the cookbook on Amazon at the beginning of this post, so there’s no excuse not to head over and buy it.

Below is the ingredient/shopping list. Note that I always prepare more than enough to just feed us for one meal. I’m a work-from-home food lover and leftovers are definitely my thing. So today, I’ve got some ancho pepper chicken breasts waiting for me as a special treat.

I like Rick Bayless’s Frontera brand Ancho Pepper Adobo seasoning which I bought at the grocery store. Here’s Rick’s recipe for it if you’d like to make it yourself. In fact, I like it better than the chipotles in adobo sauce that I was originally looking for to use in this recipe.

Other Recipes You Should Definitely Try: